Compartment syndrome can be a serious medical condition. It occurs when there is increased pressure in one of the compartments of the body. A compartment is an area with limited space due to bones, fascia (a thin casing of tissue), and other structures. When this pressure builds, the nerves and blood vessels traveling through the area get compressed. This results in a deep pain in one part of the body (usually the leg or arm).

Compartment syndrome is classified as either acute or chronic.

Acute compartment syndrome is a medical emergency. With an acute case, the speed of onset leads to very high pressure in the affected area. Acute cases usually result from a traumatic injury. They are considered an emergency and must be treated right away to avoid possible limb loss or organ damage.

Chronic compartment syndrome is common among young athletes. The condition develops slowly over time. It can be associated with exercise training errors or limited space within the compartment itself.

Physical therapists can help to identify the factors that may lead to chronic compartment syndrome and help people successfully manage their condition. They also help people regain their normal motion, strength, and function after any needed surgery.

What Is Compartment Syndrome?

The zones of our body, notably in the arms, legs, and abdomen (stomach area), are divided into compartments. The compartments contain muscles, nerves, and blood vessels. Each compartment is separated by fascia, a thick sheet-like tissue that is not very elastic. The body can handle normal changes in the pressure within these compartments. For example, our tissues may swell slightly after a hard workout or a mild injury.

But pressure builds when too much swelling occurs within a compartment and the fascia does not expand to allow for the increased volume. This pressure can be more than our bodies can handle. The result is pain and muscle damage. In addition, the blood supply within and passed to the compartment gets restricted. If the condition doesn’t go away, the tissue is injured. The pressure must be relieved to avoid permanent damage.

There are two categories of compartment syndrome – acute or chronic – based on the cause and symptoms. Common signs and symptoms for both include the "five Ps":

Acute compartment syndrome is a medical emergency. It can develop as early as a couple of hours following a severe injury. With no treatment, tissue damage can occur that cannot be fixed. ACS most often develops in the lower leg and forearm.

ACS is typically caused by a serious injury, such as:

Chronic compartment syndrome is often called "exertional" compartment syndrome. Exercise that involves repeated movements, such as walking, running, biking, swimming, playing tennis, or jumping typically cause CCS. Too much exercise, without time to recover, causes the tissues of the leg to be overworked. Development of CCS can be influenced by:

Steroid use also has been linked to CCS.

How Does It Feel?

Acute compartment syndrome. The most common signs and symptoms of ACS include:

Chronic compartment syndrome. The symptoms for CCS may be like those of ACS, but less severe and not due to an acute traumatic injury. These may include:

How Is It Diagnosed?

Physical therapists work together with other health care providers to diagnose and treat compartment syndrome. Your physical therapist will conduct a thorough evaluation to determine all the factors that may be contributing to your condition.

Acute compartment syndrome. ACS must be treated immediately. If you have signs of ACS after a severe injury, go to the emergency room right away for evaluation by a doctor. They can measure the pressure level in the involved compartment. If needed, surgery will be done to drain swelling and ease the pressure in the compartment. If you have this procedure, you will stay in the hospital until the pressure returns to normal and your wound heals properly. Physical therapy is vital after surgery to restore motion, strength, and function in the affected limb.

Chronic compartment syndrome. CCS symptoms can be like those in other conditions. Your doctor or physical therapist will evaluate you to rule out other possible diagnoses, such as:

Based on your exam, your physical therapist may refer you for imaging tests (ultrasound, X-ray, or MRI).

If CCS is strongly suspected, your physical therapist likely will refer you for a test called the "compartment pressure measurement." This test measures the pressure in the involved compartment before, during, and after exercise. The goal of the test is to reproduce symptoms that occur during real-life activities.

How Can a Physical Therapist Help? 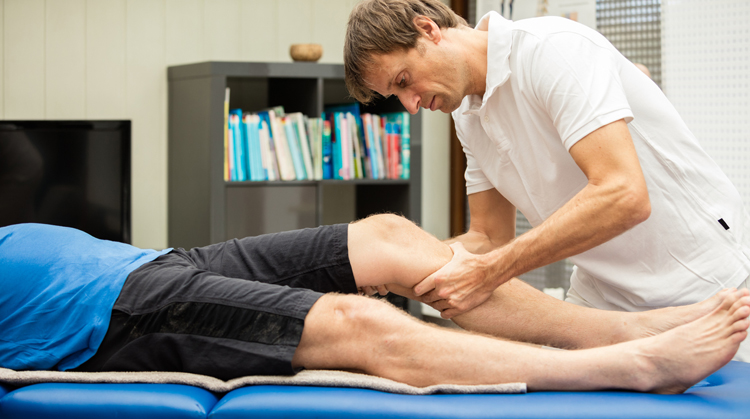 Range-of-Motion Exercises. Restrictions in the motion of your knee, foot, or ankle may be causing increased strain in the muscles housed within the compartments of your lower leg. Stretching techniques can be used to help restore motion in these joints to minimize undue muscle tension.

Muscle Strengthening. Hip and core weakness can influence how your lower body moves, and can cause imbalanced forces through the lower-leg muscle groups that may contribute to compartment syndrome. Building core strength (in the muscles of the abdomen, low back, and pelvis) is important; a strong midsection allows greater stability through the body as the arms and legs perform different motions. For athletes engaged in endurance sports, it is important to have a strong core to stabilize the hip and knee joints during repetitive leg motions. Your physical therapist will be able to determine which muscles are weak, and provide specific exercises to target these areas.

Manual Therapy. Many physical therapists are trained in manual (hands-on) therapy, using their hands to move and manipulate muscles and joints to improve motion and strength. These techniques can target areas that are difficult to treat on your own.

Education. Your treatment will include education about how to safely return to your previous activities, particularly if your condition required a fasciotomy. Your physical therapist may recommend:

How Can a Physical Therapist Help Before and After Surgery?

If you need surgery (either due to an injury or chronic condition), physical therapy after surgery will be essential to a successful recovery. Your physical therapist will work closely with your surgeon regarding the nature of your procedure, expected timelines for healing, and your progress during rehab. As a health care team, your providers will develop a plan to ensure your body has enough time to heal. Your physical therapy treatment plan will include exercises and methods at the right times to restore your movement, mobility, strength, and function.

What Kind of Physical Therapist Do I Need?

All physical therapists are prepared through education and clinical experience to treat a variety of conditions or injuries. You may want to consider:

General tips when you're looking for a physical therapist (or any other health care provider):

The American Physical Therapy Association believes that consumers should have access to information that could help them make health care decisions and prepare them for their visit with their health care provider.

The following resources offer some of the best scientific evidence related to physical therapy treatment for compartment syndrome. They report recent research and give an overview of the standards of practice both in the United States and internationally. They link to a PubMed* abstract which may also offer free access to the full text, or to other resources. You can read them or print out a copy to bring with you to your health care provider.

*PubMed is a free online resource developed by the National Center for Biotechnology Information. PubMed contains millions of citations to biomedical literature, including citations in the National Library of Medicine’s MEDLINE database.