Plagiocephaly, brachycephaly, and scaphocephaly are skull deformations caused by an infant lying in one position for too long. These conditions are also known as “flat head syndrome.” Newborn baby skulls are soft, as the bone has not hardened yet. When a baby’s head rests against a surface in the same position for too long, the infant’s soft skull may flatten. Skull deformations like plagiocephaly, brachycephaly, and scaphocephaly may affect up to 45% of newborn babies. The skull flattening can occur in the womb due to the baby being stuck in one position or having limited space when there are multiple fetuses, such as twins or triplets. At birth, the condition is “congenital”; after birth, it is “acquired.” More severe head-shape deformities are linked to developmental problems, such as movement, vision, hearing, and behavior that may last a lifetime.

A physical therapist can help reduce the flattening of a baby’s skull and restore a more normal, rounded skull shape, which may help reduce the risk of developmental delays and other disabilities later in life.

What Is Flat Head Syndrome in Infants? 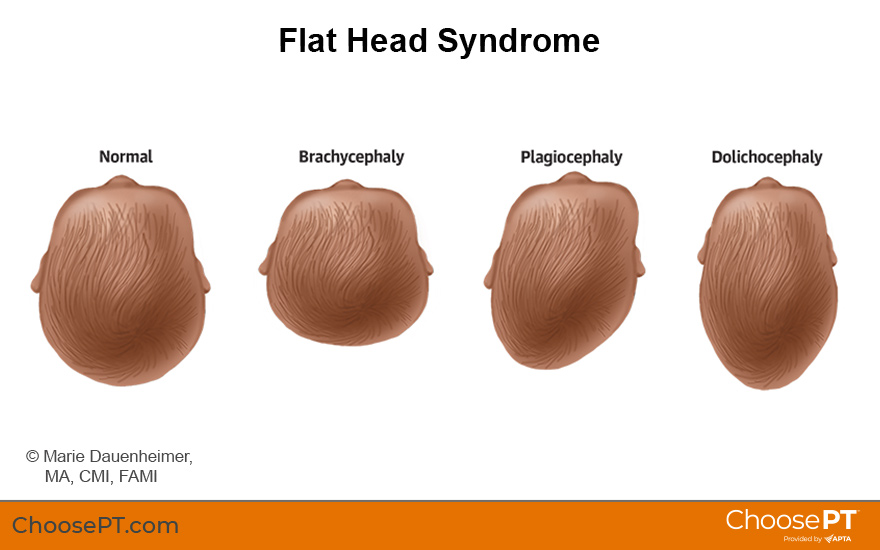 Plagiocephaly, brachycephaly, and scaphocephaly are different types of skull flattening that occurs when pressure is put on one part of a baby’s skull for too long.

Plagiocephaly. Plagiocephaly is flattening of the side of the back of the skull caused by a baby lying for too long on its back with the head turned slightly to the side. Before birth, plagiocephaly can occur in the womb if the mother’s amniotic sac does not contain enough fluid, or if there are multiple fetuses, such as twins. It also is often associated with premature birth, as premature babies often lack strength in their necks to move the head into different positions when they are lying down. When the head is left in one position too long, the soft skull deforms and flattens where it is in contact with the mattress or whatever surface on which the baby is lying.

Plagiocephaly is more common in male babies than female babies, and more commonly occurs on the right side of the back of the skull. Babies who have torticollis, painful muscle tightness in the neck that forces the head to stay rotated to one side, are particularly susceptible to developing plagiocephaly.

Brachycephaly. Brachycephaly is flattening of the back of the skull, caused by the baby lying on its back for too long. Before birth, brachycephaly can occur in the womb if the mother’s amniotic sac does not contain enough fluid, or if there are multiple fetuses, such as twins. After birth, it can occur if the infant lies on its back or is placed in a container, such as a car seat, for too many hours per day. Brachycephaly is the second most common skull deformation, after plagiocephaly.

Scaphocephaly. Scaphocephaly is flattening of the side of the skull, causing an elongated skull. This is caused by the baby lying on its side for too long and commonly happens in the neonatal intensive care unit, as premature babies are positioned on their side for ease of treatment. Scaphocephaly can also occur before birth; for example, if the fetus’s head is pressed against the mother’s rib cage.

If untreated, more severe cases of flattening of the skull have been associated with:

The good news is that a baby’s skull remains soft for a few months, so if flattening is noticed and treated early, it can re-form to a healthier, rounded shape. Reshaping of the head will also help prevent the disabilities early and later in life that plagiocephaly, brachycephaly, and scaphocephaly can cause.

In 1992, the American Academy of Pediatrics (AAP) introduced guidelines to help new parents prevent sudden infant death syndrome (SIDS). Sudden infant death syndrome was thought to be caused by infants sleeping on their stomachs, with soft materials around them that could block their breathing and cause the infant to suffocate. The phrase “back to sleep” was coined to help parents remember to clear the crib of soft blankets, pillows, and stuffed toys, and place the baby on its back to sleep, all of which was intended to keep the baby’s airway (nose and mouth) free of obstacles.

The rising incidence of plagiocephaly and brachycephaly is also due to container baby syndrome. It can occur when newborns are kept in “containers” such as car seats, strollers, and bouncy seats for too many hours in a day. If their heads are in contact with a surface for too long, even when sitting, the soft skull can deform and become flattened.

How Does It Feel?

There is no evidence that plagiocephaly, brachycephaly, or scaphocephaly cause pain. However, hearing and vision development can be delayed in babies with severe head-shape deformities, therefore, affected babies may not be hearing or seeing the world in a normal way.

How Is It Diagnosed?

CAUTION: If you see these problems, seek medical help immediately!

Your physician will evaluate your baby's head to determine the cause and extent of skull flattening. Your physician may refer your baby to a physical therapist for treatment.

Your physical therapist will conduct a thorough evaluation that includes taking the baby's health history. The physical therapist also will ask you detailed questions about how the baby is handled and the baby's activity level each day, and gently test for signs and symptoms of common plagiocephaly, brachycephaly, and scaphocephaly problems, such as:

Your physical therapist will examine:

Your physical therapist will likely also test for problems that can possibly occur in babies with severe plagiocephaly, brachycephaly, and scaphocephaly, such as:

Your physical therapist will likely collaborate with a physician or other health care provider to make a final diagnosis. Further tests may be necessary to confirm the diagnosis, and to rule out other problems.

If your physician notices signs of plagiocephaly, brachycephaly, or scaphocephaly before you do, the physician may refer your baby to a pediatric physical therapist for evaluation and treatment.

How Can a Physical Therapist Help?

Based on the findings during the examination, your physical therapist will develop and implement a treatment plan to address your baby's specific needs.

Skull shape. Your physical therapist will help your baby achieve and stay in certain positions that will give the skull a chance to become more normally rounded. Physical therapists teach parents this “repositioning therapy,” so it can be done at home. Repositioning therapy is the first line of home treatment. Your physical therapist will teach you how to reposition your baby in ways to aid in developing more normal movements, strength, and skull shape. This therapy usually consists of increased floor time and “tummy time,” and increased times of sitting upright.

Parents are encouraged to hold their baby more, and to perform other activities to encourage movement. Recent guidelines recommend tummy time 3 times a day, with constant adult supervision. Your physical therapist will design a safe program to gently treat your baby's particular symptoms.

Based on each child's condition, the baby's pediatrician may prescribe an orthotic device, such as a remolding helmet, to gently redirect the growth of the baby’s skull.

CAUTION: Babies should not sleep in carriers or strollers at night unless instructed by a pediatrician.

Motion. Your physical therapist can help loosen any tight neck muscles your baby may have by using specific stretching motions, positions, and hands-on techniques called "manual therapy." These techniques gently help the tight muscles relax, which allows the baby to regain more movement in the neck.

Strength. Your physical therapist can work on specific skills your baby needs to develop. The therapist may use toys, games, and songs to encourage your baby to learn new movements and strengthen underdeveloped muscles. The program will progress to match the growing skills and strength of your baby.

Your physical therapist can help improve your own:

Knowledge. Your physical therapist can educate you about the causes of the flattened skull, and teach you healthier ways to position, feed, and provide safe nap and play times for your baby.

Preventive skills. You'll learn how to safely place your baby on the tummy (eg, on the floor or in a playpen) after every feeding, nap, diaper change, and whenever the baby is awake and alert. Holding the baby for feedings, rather than feeding the baby in a carrier or stroller, allows the baby to look around, which improves neck and eye movement. A playpen is a good way to allow the baby to be active and safe while giving the parent some time to get chores done, without confining the baby to a container. Changing the position of toys and mobiles in the crib encourages babies to turn their heads in different directions.

Can This Injury or Condition Be Prevented?

Parents can prevent the development of acquired (after-birth) plagiocephaly, brachycephaly, and scaphocephaly by:

Congenital (prebirth) forms of these conditions cannot be prevented, but early treatment will yield the quickest and best results in correcting skull shape.

What Kind of Physical Therapist Do I Need?

Many physical therapists are prepared through education and experience to treat children who have plagiocephaly, brachycephaly, and scaphocephaly. You may want to consider:

General tips when you're looking for a physical therapist:

The American Physical Therapy Association believes that consumers should have access to information that could help them make health care decisions and also prepare them for their visit with their health care provider.

The following articles provide some of the best scientific evidence related to physical therapy treatment of plagiocephaly and brachycephaly. The articles report present research and give an overview of the standards of practice for treatment both in the United States and internationally. The article titles are listed by year and linked either to a PubMed abstract of the article or to free full text, so that you can read it or print out a copy to bring with you to your health care provider.

*PubMed is a free online resource developed by the National Center for Biotechnology Information. PubMed contains millions of citations to biomedical literature, including citations in the National Library of Medicine's MEDLINE database. 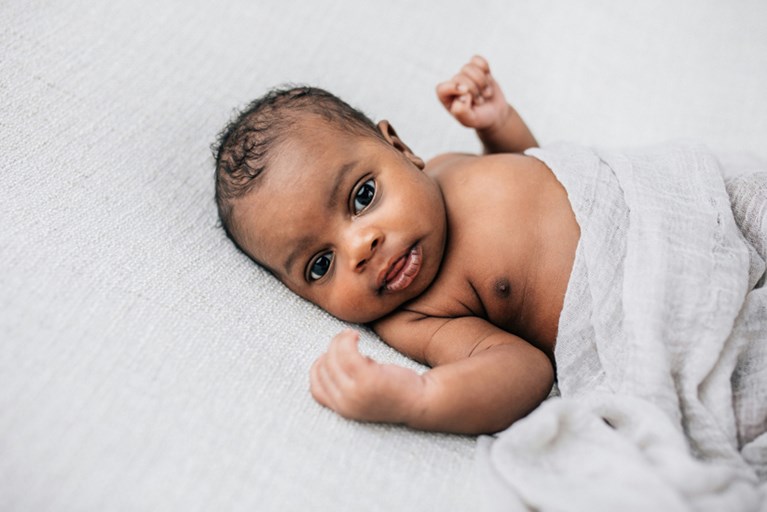 A physical therapist and orthotist discuss the treatment of plagiocephaly (or flat head syndrome) for babies. 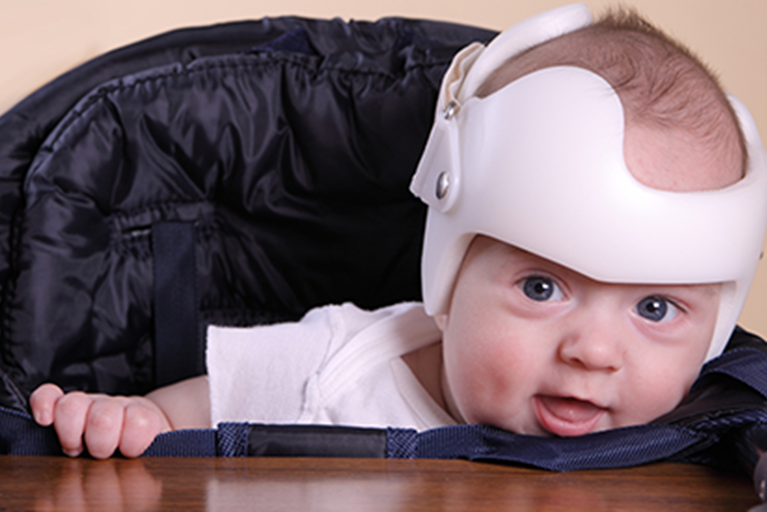 Almost Half of Babies Have Flat Spots

Putting babies to sleep on their backs helps prevent sudden infant death syndrome, but it may have led to an increase in flat spots on babies' heads. If