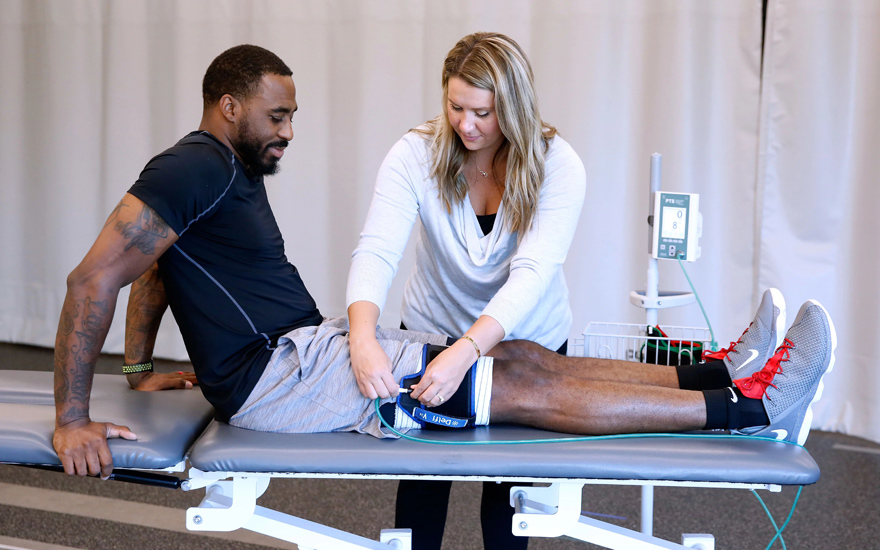 Improving strength is a typical component of physical rehabilitation after injury. But often standing in the way of all the muscle building necessary to recover from an injury is the injury itself.

The technique, which involves applying a tourniquet to an injured limb to partially restrict blood flow, allows patients to make greater strength gains while lifting lighter loads, thereby reducing the overall stress placed on the limb.

In this episode, Owens describes how blood flow restriction training works, shares his vision for the potential of the technique within health care, and discusses where research is ongoing.

Physical therapist Johnny Owens, PT, MPT, is the former Chief of Human Performance Optimization at the Center for the Intrepid (CFI), which is part of the San Antonio Military Medical Center–Department of Orthopaedics and Rehabilitation (DOR). Johnny was at SAMMC for 10 years, treating service members suffering severe musculoskeletal trauma. His successes included the application of regenerative medicine for volumetric soft tissue loss and Return to Run Clinical Pathway, an internationally recognized rehabilitation program designed to combat delayed amputations and compliment a dynamic exoskeleton, the IDEO. He took part in numerous multi-center research projects involving regenerative medicine, sports medicine and rehabilitation of the combat casualty. He has been applying Blood Flow Restriction Training clinically since 2012 and credits the modality with significant strength recovery in more than 300 patients.

Owens has been published extensively in the peer-reviewed literature and his work has been featured on 60 Minutes, Time magazine, NPR, Discovery Channel and ESPN. He is currently the owner of Owens Recovery Science in San Antonio, Texas.